Although the COP24 yielded worryingly few advances, there are still glimmers of hope for climate change progress.

Although the COP24 yielded worryingly few advances, there are still glimmers of hope for climate change progress.

At the start of 2019, Schroders’ Climate Progress Dashboard points to a long run temperature rise of 3.9°C. Although a slight improvement on the 4°C rise implied last quarter, our analysis implies that a lot more change is needed to contain temperature rises to the 2°C commitment global leaders made in Paris in 2015. Their agreement to pursue efforts to limit the rise to 1.5°C is losing hope.

The Climate Progress Dashboard provides a bird’s eye view of the speed and scale of climate action across the spectrum of areas that will drive decarbonisation. Schroders created the dashboard to provide our analysts, fund managers and clients with an objective measure of the pace of climate action, helping them to navigate a challenge that will have a dramatic impact on financial markets, but which is too often dominated by sound bites, emotion and rhetoric.

Andrew Howard, Head of Sustainable Research at Schroders, explains why the current level of action continues to point to long-run temperature rises of around 3.9°:

"The strength of carbon prices - rising in Europe for over a year and stronger in North America last quarter – was the main driver of the improvement from last quarter’s 4° trajectory.

"However, for all the attention climate change received toward the end of last year – Google searches were at twice the level of the previous quarter – tangible action remains sparse.

"The International Panel on Climate Change (IPCC) underlined the need for action when it released a report in October warning that meeting climate goals would require an effort that is “unprecedented in terms of scale”. That organisation – which synthesises the work of global climate scientists – concluded that limiting global temperature rises to 1.5 degrees over pre-industrial levels would require an approximate halving in emissions by 2030 and their elimination by 2050. Global emissions, meanwhile, have continued to rise. According to preliminary studies by the Global Carbon Project global emission were 2.7% higher in 2018.

"Even so, the IPCC’s message appears to have fallen on deaf ears at the 24th Conference of the Parties (COP24) in Katowice in December. The annual event brings political leaders together from around the world to move the climate agenda forward. It included the bizarre sight of a celebration of coal and ended with a threadbare agreement that pushes the prospect of tougher action back to 2020.

"The events previous president pointed out in his closing remarks at the event, that “some countries fail to fully comprehend the scale and urgency of the crisis” and called for 2019 to mark the year in which “dialogue must give way to action”. We are becoming increasingly doubtful that a binding global consensus will be reached quickly enough to deliver the change needed to meet the commitments made in Paris three years ago.

"However, there are more reasons for optimism in other areas, underlining the importance of looking past simplistic headlines at the more complete picture painted in the Climate Progress Dashboard.

Not all doom and gloom

"In our view, the key to climate action on the scale and speed needed to avoid the worst physical effects of climate damage lies away from discussions at the annual COP summits.

"While media attention focuses on a global agreement building from the Paris Accord reached in 2015, most action has been made independently. Countries representing more than half the world’s car sales have now committed to banning combustion engine cars. In November, The Climate Group, Carbon Disclosure project (CDP), and PricewaterhouseCoopers (PwC) reported that 120 leading states and cities, representing over one-fifth of the global economy, had committed to decarbonising twice as quickly as the G20 group of leading countries.

"The costs of clean energy and electric transport have also plummeted in recent years. Onshore wind and solar power generation costs are now close to the cheapest fossil fuel power stations.  Electric vehicle costs have similarly fallen close to the levels of gasoline or diesel engines, with China now adding 4,000 electric buses to its roads every two weeks – equivalent to the total number of buses serving the Paris region. 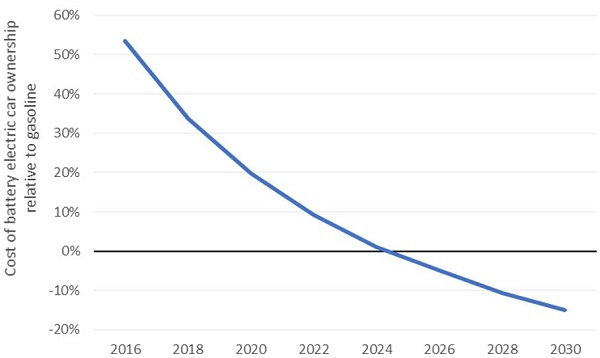 "Climate change has never been a more important investment theme. Action to address its causes will continue whether or not a global consensus is reached, but its pace must accelerate to meet global climate goals. Pockets of compelling opportunities where technology has matured to the point of economic competitiveness will continue to grow, but the global transformation that will be needed requires a more comprehensive shift.  Without it, temperatures and physical damage will continue to rise putting a drag on the global economy that will eventually become debilitating.

"Climate change will be an unavoidable challenge.  Investors will do well to track its trajectory."

The views and opinions contained herein are those of Schroders’ investment teams and/or Economics Group, and do not necessarily represent Schroder Investment Management North America Inc.’s house views. These views are subject to change. This information is intended to be for information purposes only and it is not intended as promotional material in any respect.

Schroders is a world-class asset manager operating from 37 locations across Europe, the Americas, Asia and the Middle East.

For Press inquiries or any media relations questions, please contact us.