What it takes to be promoted to emerging market status

What it takes to be promoted to emerging market status

We highlight the disconnect between an index provider’s definition of emerging markets and what investors think they are getting.

We highlight the disconnect between an index provider’s definition of emerging markets and what investors think they are getting. 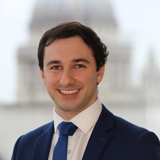 The index provider MSCI recently announced that both Argentina and Saudi Arabia will be promoted to its emerging markets index next year. Although their index weights will be small, this is expected to generate billions of dollars worth of fund inflows into these countries based on the US$1.9 trillion in assets benchmarked to the MSCI Emerging Markets Index[1].

Many investors dedicate an allocation of their portfolio to emerging markets to capture their growth potential. You may have heard the rationale many times - young populations with faster-growing economies may deliver strong investment returns, albeit with the potential of more ups and downs along the way. But investors should be careful not to confuse the term emerging market with the term emerging economy.

For example, many countries which feature in MSCI’s emerging and even frontier (the stage below emerging) market indices are advanced in economic terms – see image below. Korea and Taiwan are obvious examples. On some measures (for instance, GDP per capita, a measure of living standards), Taiwan is even more developed than countries such as Canada, the UK, France and Japan[2]. In addition, the companies within these markets can also be among the global leaders in their fields, such as Samsung Electronics and Taiwan Semiconductor, yet be classified as emerging market companies. 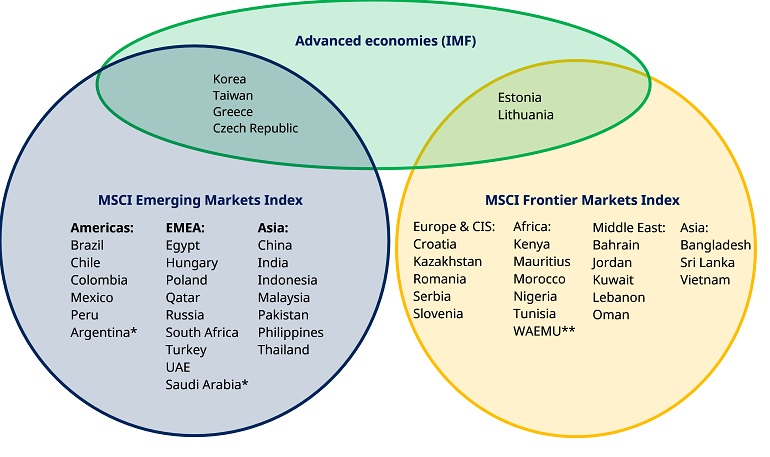 This occurs not because MSCI applies especially draconian rules about a country’s stage of economic development. The opposite, in fact. Over half of the 57 countries that make up MSCI’s Emerging and Frontier Markets Index already exceed its minimum economic standards to be included in its developed market indices.

What index inclusion really boils down to…

The reality is that index inclusion boils down to market size, liquidity and accessibility rather than economic status or prospects. In contrast, the IMF ranks countries based on purely economic criteria such as export diversification and the degree of integration into the global financial system. This often under appreciated distinction can have some nuanced effects on index composition, such as those highlighted above.

Among other things, accessibility conditions cover perfectly sensible considerations such as whether there are any restrictions on foreign ownership and the ease at which investors can get their money into and out of a market. It also captures certain operational matters such as the ability to ‘short sell’ a stock (sell a stock that you don’t own, in the hope that you can earn a profit by buying it back at a lower price in future) and the level of sophistication of the regulatory framework governing the financial market.

Most frontier and emerging markets fall down on one or several of these conditions. For instance, one reason Korea and Taiwan are classified as emerging, rather than developed markets, is because their foreign exchange markets are not fully liberalised.

For emerging markets index inclusion, a stock market must have at least three stocks which meet minimum size and liquidity thresholds. For frontier market status, two stocks must meet a more lenient version of these thresholds. But these hurdles often mean that only a handful of companies make it into the index upon the country being promoted – hardly a fair representation of the country’s stock market, let alone the underlying economy.

For instance, the number of constituents in the MSCI Argentina Index is projected to decline from 14 today to 11 when it is promoted from the MSCI Frontier Index to the MSCI Emerging Markets index[1]. One consequence is that its free float-adjusted market capitalisation would be almost US$2 billion lower as an emerging market than as a frontier market. In a back-to-front logic, promotion will result in MSCI Argentina being a smaller part of MSCI’s global markets indices, not a larger one. Active managers, however, might still choose to invest in stocks listed in Argentina, but not in the MSCI Argentina benchmark.

The effect of reclassification on a country’s index weight

What is also noteworthy is the effect that reclassification can have on a country’s total index weight, as it often means moving from being a big fish in a small pond to a small fish in a big pond. For example, Argentina is currently the second largest member of the MSCI frontier market index, with a benchmark weight of 17%. However, it is only projected to make up 0.5% of the MSCI emerging market index after it is upgraded[2].

From an investor’s point of view, this highlights the disconnect between an index provider’s definition of emerging markets and what investors think they are getting. At a minimum it suggests a degree of discretion is warranted when deciding how to invest one’s assets.

Four reasons why the odds are stacked against US equities

Is India the next great convergence story?